Brief History of the Cognitive Disabilities Model and Assessments

The cognitive disabilities model had its beginnings at the Eastern Pennsylvania Psychiatric Institute in the late 1960’s when Claudia K. Allen, MA, OTR, FAOTA and her colleagues first observed patterns of performance difficulties in adult patients with mental disorders. In seeking to better understand and thereby serve the needs of these individuals, Allen and other therapists began a systematic and careful collection of observations of these difficulties. The focus of inquiry at that time was the “sensorimotor actions originating in the physical or chemical structures of the brain and producing observable and assessable limitations in routine task behavior” (Allen, 1985). The construct of “functional cognition” has since become a useful term for describing the focus of concern of the cognitive disabilities model. Functional cognition encompasses the complex and dynamic interactions between an individual’s cognitive abilities and the activity context that produces observable performance.

Allen and her colleagues first observed and described a sequence of six levels of abilities, called the cognitive levels, in the 1960’s and early 1970’s. The cognitive levels were conceptualized as a hierarchical sequence of sensorimotor abilities similar to the developmental levels of cognition described by Jean Piaget. These underlying global cognitive abilities produced clinically observable, qualitative differences in abilities to perform functional activities. Based on her observations of functional performance, Allen hypothesized that this sequence could be observed in the progression and remission of mental illness, dementia, and fatigue in adult individuals.

Work on the levels continued by Allen and others at Johns Hopkins Hospital in Baltimore and after 1974, at LAC+USC Medical Center in Los Angeles. A test of learning three increasingly complex sewing stitches on a piece of leather, now known as the Allen Cognitive Level Screen (ACLS), was developed to provide a quick measure of learning and problem solving abilities. A standardized procedure for administering the ACLS was developed in 1978 (Moore, 1978). Several studies followed, establishing inter-rater reliability and correlations between the ACLS and other psychological tests including the Block Design of the WAIS, the Brief Psychiatric Rating Scale, Shipley Institute of Living Scales, and the Symbol Digit Modalities Test. Other studies examined the relationship of cognitive level, as measured by the ACLS, to different psychiatric disorders, and between normal and psychiatric populations. The standardized directions for the ACLS were first published in the text Occupational Therapy for Psychiatric Diseases: Measurement and Management of Cognitive Disabilities (Allen, 1985) and revisions in ratings were made in 1988, 1990, 1996, and in 2000.

The ACLS kit was made available for purchase from S&S Worldwide in 1990. An enlarged version of the ACLS, the Large Allen Cognitive Level Screen (LACLS), was developed for use with persons with vision impairments and impaired hand function in 1992 (Kehrberg, et al., 1992).

In 2007 the fifth version of the Allen Cognitive Level Screen (ACLS-5) was published. The six contributing authors relied on feedback from various stakeholder groups in academic and practice settings and were guided by the Standards for Educational and Psychological Testing (AERA, et al., 1999). This process continued the tradition begun by Allen of relying on the skilled experiences and opinions of many expert clinicians to develop the tools used in the cognitive disabilities model. The fifth version defined the construct of “functional cognition” as encompassing “both functional performance and the global cognitive processing capacities of the brain” (Allen, et al., 2007). The structure of the test and its links to theory were described, as was the intended use of the assessment as a screen to guide further interventions.

The Disposable LACLS-5 (LACLS[D]) was introduced in 2016. Research studies designed to evaluate form equivalence among the ACLS-5, LACLS-5 and the LACLS[D] are currently being conducted. (McCraith, 2016)

During the 1980’s, Allen and therapists at the LAC+USC Medical Center became increasingly aware that they were unable to adequately account for clinically significant improvements observed in functional activities with the existing 6 point cognitive level scale. As a result, an effort to identify the elements of an expanded scale began in 1990. The modes of performance, a 26 point expansion of the original 6 cognitive levels, were published in Occupational Therapy Treatment Goals for the Physically and Cognitively Disabled in 1992 (Allen, Earhart, & Blue, 1992). In this text, Allen also articulated the framework for a clinical practice theory. Assessment tools described included the ACLS-90; the Routine Task Inventory-2, an analysis of fourteen activities of daily living by cognitive level; and the Cognitive Performance Test, six standardized tasks of daily living analyzed by cognitive level. The Routine Task Inventory-Expanded (RTI-E) has since been developed by Katz (2006) and the CPT has been used to assess function in persons with dementia (Burns, 1994). 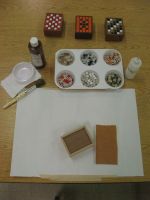 In 1993, Catherine Earhart, Allen, and other experienced therapists at LAC+USC Medical Center combined their extensive clinical experience to develop the first edition of the Allen Diagnostic Module, a collection of 26 craft based performance assessments that engage new learning and problem solving abilities. The materials and procedures used in each assessment were standardized to introduce predictable problems to solve while engaging the individual’s energies in making a useful and attractive object such as a greeting card or a key chain. An extensive manual provided protocols describing the dynamic administration and scoring of each assessment. The ADM administration manual was updated in 2006 with expanded Guidelines for Use and a format guided by the Standards for Educational and Psychological Testing (AERA, et al., 1999). The ADM-2nd Edition contains 35 assessments with task demands ranging from modes 3.0 through 5.8 on the Allen scale of modes of performance. The photo above illustrates the set up of the Recessed Tile Box, one of the ADM performance assessments.

Currently, the cognitive disability model and related tools are used by therapists practicing in the areas of mental health, forensic psychiatry, rehabilitation medicine, and geriatric care. Interventions vary by setting and the clinical problems to be solved. In acute care settings, changing functional capacities are assessed and monitored for anticipated improvements. The photo on the left illustrates the set up for the Leather Key Fob, another ADM performance assessment. In post-acute or stable conditions, the Allen scale of levels and modes provides a specific activity analysis that identifies the cognitive and motor requirements of meaningful activities that the individual wants to do. This assists therapists to identify realistic goals that match current abilities. In deteriorating conditions, therapists may recommend meaningful activities that help maintain abilities, protect the person’s safety, and reduce the burden of care. In all settings, understanding remaining abilities fosters a realistic optimism for success in participation in community life.

In 2016, Claudia Allen initiated a revision of the Cognitive Disabilities Model with the introduction of the ACDMWeb, the ACLS-6 and the Allen App. These are currently being written and revised and pilot studies have begun. (Allen, 2016)

McCraith, Deane (2016) ACLS-5 and LACLS-5 Test: Psychometric Properties and Use of Scores for Evidence-Based Practice (copyright 2016, the Allen Cognitive Group/ACLS&LACLS Committee) Retrieved from www.allencognitive.com on 2/7/2017